Adult Tricycle Reviews by the Experts

George Chen, the owner of Performer Cycles, has always been a cyclist. George fell in love with bike riding as a youth and his passion for the bicycle and riding community has only grown. George had the opportunity to ride a recumbent bike almost thirty years ago and he was shocked at how much more comfortable and faster it was than his current upright two wheel bike.  George instantly became a big fan of recumbents. George’s passion for cycling led him to opening his own bicycle factory almost twenty five years ago.  He got his start doing contract work for other companies which is all well and good but if you met George you would see he has so many ideas in his head that building products for other companies is not what he is about.  Soon after opening his factory, George started his own brand called Performer Cycles.  George is like Henry Ford; he wanted the best quality control for his products. George chose to do the entire manufacturing process himself in his own factory, where he could control the quality of his bikes and trikes.

When I visited some other factories in Taiwan, it was quite different. You had the guy who only build frames and they have a relationship with someone who only paints, then there is someone else who does all the assembly.  I am not a big fan of this type of manufacturing because there are too many different people involved and it is more difficult to control quality.  George can walk out in his factory at any time and inspect frame manufacturing, painting, assembly, and packaging within minutes.  Performer’s best selling product is their recumbent trikes but they are well know for their recumbent bikes as well.  Performer can build bikes and trikes out of carbon fiber, titanium, aluminum and chrome-molly steel. Their carbon trike and carbon tandem are really incredible. The material of choice for most bikes and trikes is aluminum. For most situations aluminum is the best material to work with.  I have seen some of the old school lugged chrome molly steel road bikes that George produces. They are works of art. The old school lugged frames with fancy sculpted lugs remind me of the Italian racing bikes from Pinerello, Colnago, and Basso from the early 80’s. George has an incredible first mate. Her name is Christine. She has been with Performer Cycle almost from the beginning. Christine has been a big part of the day running of Performer Cycles.  Christine is a small energetic lady with a big smile that really knows her products and the bike industry very well.

I just did a consultation with a gentleman who was a professional basket ball player.  He is over 6’-7” tall and simply there is no trike large enough for him on the market.  He could actually send his measurement to Performer Cycles and they could produce a one of a kind trike specifically for his size. I can not think of any other company willing to do that type of customer service.

Frame: The frame on the JC 26X is made of aluminum that is TIG welded together in Taichung Taiwan.  I would have to say the welds are beautiful and of the highest quality in the industry. George chose an adjustable coil spring rear shock, rather than an air shock from Rock Shox for the JC 26X. The difference is about $270 dollars.  I think the coil spring rides fine. What is really more important than the shock is the pivot point of the swing arm on the frame, the shock geometry, spring rate and placement on the frame.  The frame on the JC 26X is a flat fold design where the rear wheel turns 90 degrees when folding and comes to rest flat over the boom. The seat can be removed by the quick release pins.  Not the easiest seat to remove but still very doable for most people. When folding the trike the rear tire just barley clears the handlebar which is nice because on some other brands you have to fold the one handlebar down before you can fold the frame. The Performer JC 26X has a maximum rider weight capacity of 300 Lbs.

Paint: The Performer JC 26X powder coat is extremely well done. The powder coat is sprayed on evenly and consistently.  The color and dept to the paint is amazing. It just looks to be a very quality paint job. I did notice the paint did seam to chip a little easier than I thought but overall it is a thumbs up paint job that should last you a long time.

Drive Train: The shifting is superb on the JC 26X . Performer chose a premium Shimano drivetrain with nine gears to choose from in the rear and three chain rings in the front for a total of twenty seven speeds. The Shimano front and rear derailleur performed flawlessly mated to the Microshift Bar End Shifters. Performer prefers Bar End Shifters and you will see them on all of their trikes. Bar end shifters are my shifter of choice as well. Bar end shifters just make sense for me.

Brakes: Performer Cycle likes Tektro Disc Brakes. Tektro is a huge brake manufacture and probably the largest bicycle brake manufacture in the world. Tektro makes a wide variety of brakes. The brakes that Performer Cycle chose for the JC 26X, is a simple cable actuated disc.  A big advantage to Tektro brakes is that replacement pads are available. Sure Performer could have used a less expensive brake but with those cheaper brakes there are no replacement pads that are available after market.  I thought the trike stopped fine with the Tektro Disc.  Nothing unexpected, just good, solid, predictable braking.

Seat: Like all the other Performer bikes and trikes, the seat is interchangeable. The most popular seat for trikes is the mesh seat where it is very breathable and well constructed.  Although I do think Performer should come out with an updated version where it is padded and the bottom is a bit larger to fit big American butts. The other seat option is the FRP which is available in a fiberglass version and a carbon fiber version.  This seat gives the trike that racy high performances feel.  The seat height is 11.2″ (284 mm) and the seat angle can be adjusted from 36 Degrees to 39 degrees.

Handling: Direct steer vs indirect steer: which is best?  If you have read any of my other reviews it is easy to see I have made up my mind in favor of indirect steer. Many recumbent trikes have “direct” (tiller type) steering. Where, for cheapness, the handle bars are clamped directly onto the kingpins without any intermediate linkage and bars have to be moved in the opposite direction to which you are going. The Performer JC 26X has direct steer that does not mean I do not like it. Actually, for a direct steer trike, I would give a slightly above average score compared to other direct steering trikes. I thought the trike rode nice and straight and the steered well.  I thought the trike also handles well while pedaling hard and braking hard. I thought the turning circle seems a bit large, so you had to plan your turns a little more in advanced

Ride: I think the ride is good and the comfort is far better than most trikes, due to the addition of the rear suspension. Living in the Midwest our road conditions are fairly poor due to freeze and thaw action and a lack of funding by so many communities to repair the roads.  Adding suspension to a trike makes the ride so much more enjoyable. I hear people say that the suspension adds weight to the trike. I can tell you it is worth the slight weight penalty.  Even though I could not feel it, the rear of the frame looks to be a little flexy.  The only way you would know the frame is flexing is if you were riding behind the trike and the rider turns hard. It looks like the rear wheel flexes to the opposite direction of the turn.  Like I said though, it was only under hard turning and you only could see it if you were riding behind the JC 26X.

In conclusion: You may never have heard of Performer Cycles but they have been building quality trikes for a very long time. Here is how I think the Performer JC 26X scored 10 put of 10 points
Frame quality and ride: 7
Paint: 9
Component value: 10
Seat: 5
Handling: 6
Front fenders: 3
Value for the money: 11
The pricing just does not look correct for what you are getting, is it really less than ½ the price of it closest competitor the HP Velotechnik Scorpion Fx? Yep it really is!

Pros: Performer trikes are just such an incredible value if they doubled the price it is on par with some other brands.

Cons: The front fenders are not up to par, just to wimpy, I did not like the bracket sticking out from the side of the fender either.

Your local bike shop or www.truebicycles.com 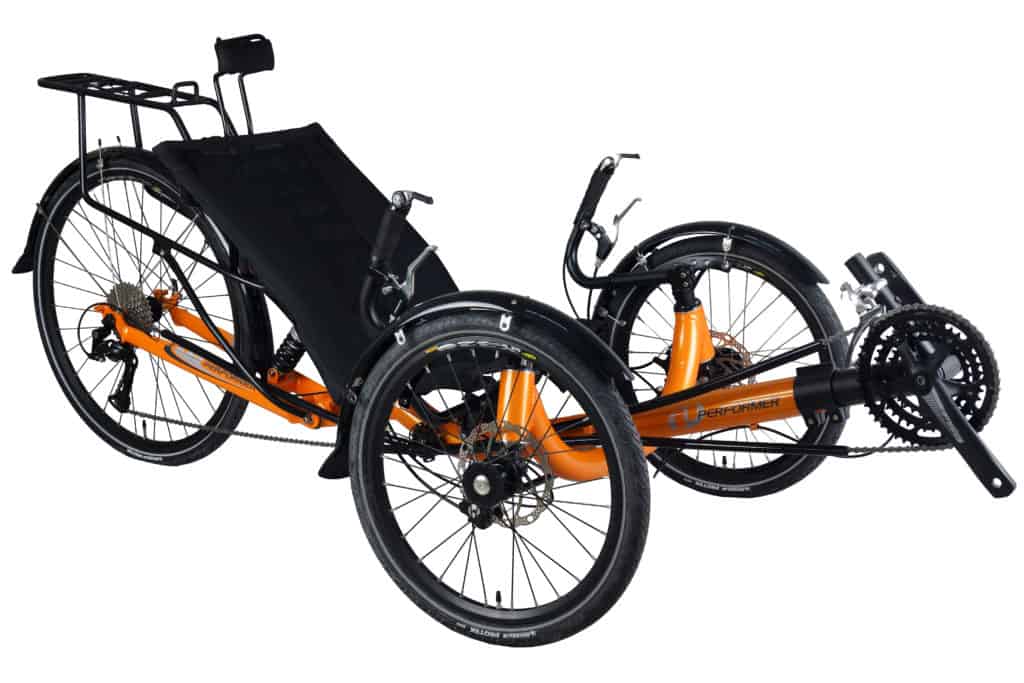 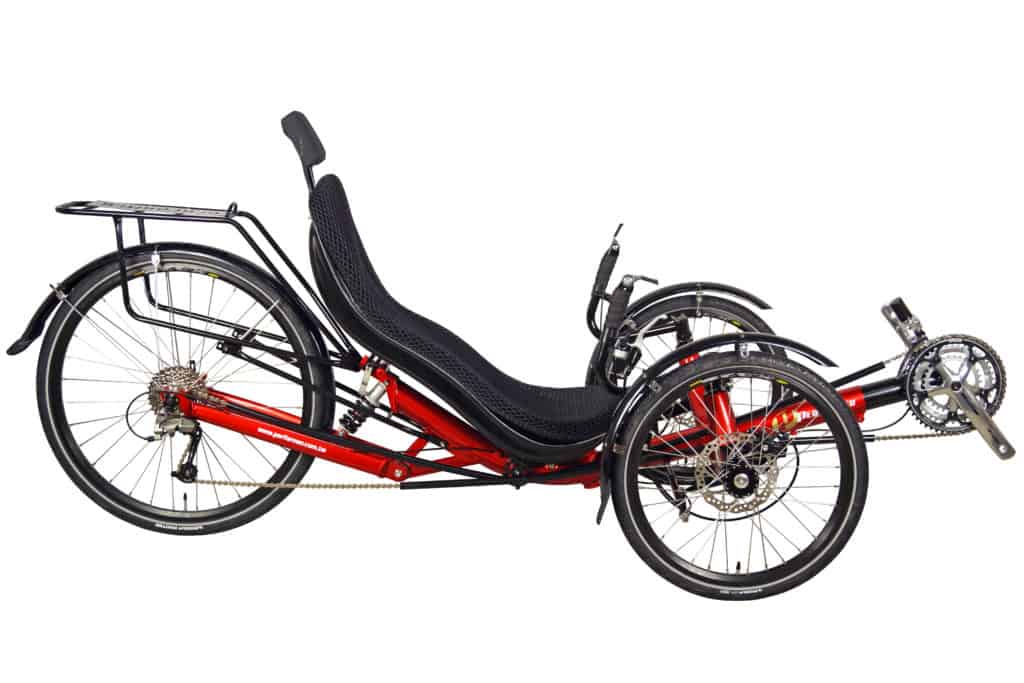