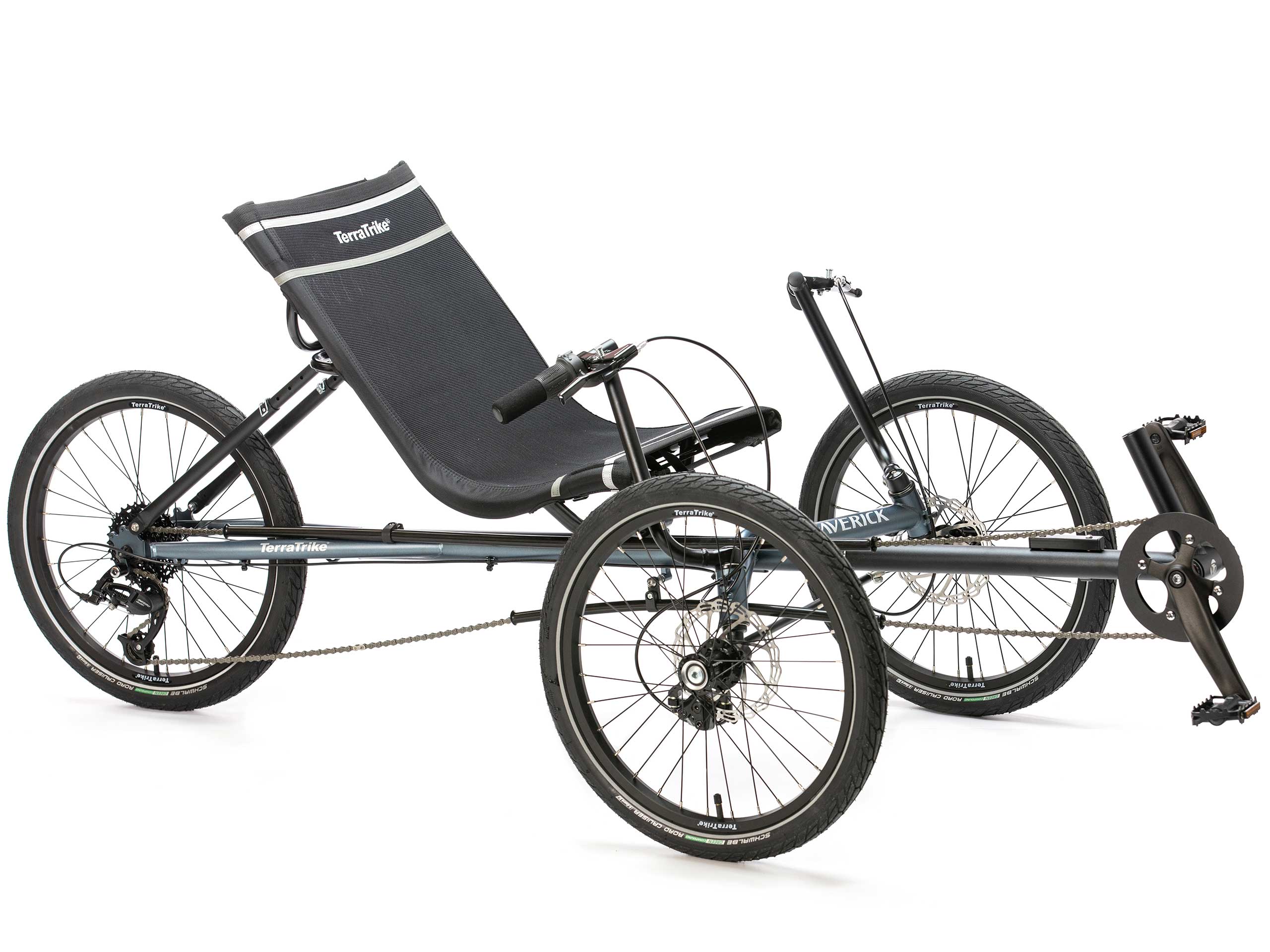 The TerraTrike Rover has been the best selling recumbent trike in the world, for years. TerraTrike has achieved greatness, simply by listening to what customers are asking for and giving them exactly that. The team of people that TerraTrike has assembled is just fantastic, which is in part what has got them to where they are today. The Terratrike Rover has been replaced with the new lighter, faster, sleeker, and better riding model called the Maverick. The Maverick is now TerraTrike’s entry level trike. TerraTrike offers the Maverick in an eight speed external drivetrain and an electric conversion is available from Bosh as well. So many people are attracted to the Maverick for a variety of reasons. The number one reason is simple. They can get in and out of the trike easily. The Maverick has one of the highest seat heights in the industry. These same people can also use the Maverick handlebars to help them get in and out of the trike. Second, is that new entry level riders love the ability to have the seat adjusted to a very upright seat angle. I am still not sure why so many people are so adamant on sitting so straight up. It is interesting though, if you tell that same person they can be more efficient and faster if they lean the seat back a bit, they will have some excuse why that is not right for them. I think if you poll these same people a year later, 20% have reclined the seat further back. Another 20% now feel the seat angle is not such a big deal any more and 60% have never moved their seat to try a different position. Third, is the entry level pricing. Fourth is the handlebars shape and positioning.

Frame: The frame on the Maverick is similar to the Terratrike Rambler. The frame is steel, TIG welded together and come with a 275 lbs capacity. The beauty of the Maverick frame is that it is a simple and well thought through design with good quality welds and workmanship. The frame has two positions for the seat placement to accommodate different size riders. The 2021 Terratrike has a new seat extender allowing extra tall individuals to move the seat further back.

Paint: The paint was nice. The paint was applied evenly and consistently with no thin spots or runs. The paint looked to be very generously applied. TerraTrike chose a steel blue color which is acceptable to both men and women.

Drive Train: Currently for 2022 the Maverick is only offered in an eight speed external drivetrain with a rear derailleur. This give the owner who wished to electrify his trike lots of choices. The Maverick can accept a powerfull rear hub motor with a throttle. Terratrike also has a premium Bosh upgrade kit to electrify the Maverick or you can also retro motor kits on from EBO and Bafang.

Brakes: The brakes are ProMax mechanical disc brakes, which do a fine job stopping the trike. The Promax brakes have a solid feel and stop the trike reasonably well. The brake levers have a parking lock where there is a button on the brake lever that you can push and lock the brake in the on position.

Seat: The seat is a simple nylon seat with straps that hold it securely to the seat frame. The seat was comfortable enough but the seat fabric is not very breathable. Terratrike has a solution, you can upgrade the seat fabric, which is more breathable or better yet, upgrade to the new padded set cover which goes overtop of the existing seat fabric. The Maverick seat height is 15 ½ inches which make it one of the highest seats on the market and it can be adjusted from 40 to 70 degrees.

Ride: The Maverick is an entry level trike so you can not expect the ultimate ride at a low price. Like the old saying goes you can not get champagne taste, on a beer budget. So one of the things we liked about the Maverick was the small turning circle. We also felt the Maverick was very nimble and agile. We also like the upright seating position, if that is what you are looking for. So what did we not like? The steering took a bit more muscle to steer than we liked. There is no bearing in the front of the trike and there is a noticeable amount of friction to turn the handlebars. What was interesting though, was when you were riding the Maverick, that extra resistance to turn the handlebars was not noticeable. The ride is stiff, if you live in Florida where the roads and paths are smooth, then no problem, but if you live in the Midwest, prepare to get some fillings replaced after those big bumps. Switching the tires out to say, the Schwalbe Big Apple, should smooth the ride out a bit.

Accessories: Terratrike is one of the best companies, when it comes to accessories. Terratrike is looking out for you! They include their Heal Sling on all Terratrikes models. One of the worst things that can happen while riding your trike, is to have your foot slip off the pedal which can cause an accident. In my opinion, just about everyone should be riding with clipless pedals and cycling shoes. Clipless pedals and shoes are safer and simply more comfortable than wearing your standard street shoes. For the people who can not be talked into the clipless pedals and shoes, there are Heal Slings. Terratrike also had a long list of well made accessories like racks, neck rest, mudguards, seat pads and mounts for lights and computers.

In Conclusions: If you are looking for a solid built entry level trike on a budget, or a trike that is easy to get on and off of, the Maverick would be a good choice.

Pros: Easy to get on and off of and the Maverick’s low price.

Cons: Stiff ride and the ability to really make the trike go fast because of the limited range of gearing.

Best place to buy: Your local Terratrike Dealer or www.industrialbicycles.com